In October of last year, I entered a facebook competition to win two nights accommodation for our family plus 2 mornings of provided breakfast. Obviously I wouldn’t be writing here if we hadn’t won but yes we did win and my husband and I took our three children to Breakaway Farmstay Victor Harbor just last month and I can happily say they we would indeed go again! You can find their website at www.breakawayfarmstay.com.au. The host Rob made us feel so welcome and we were greeted on arrival with a bottle of wine and some chocolates (as well as Marley, one of the farm dogs). 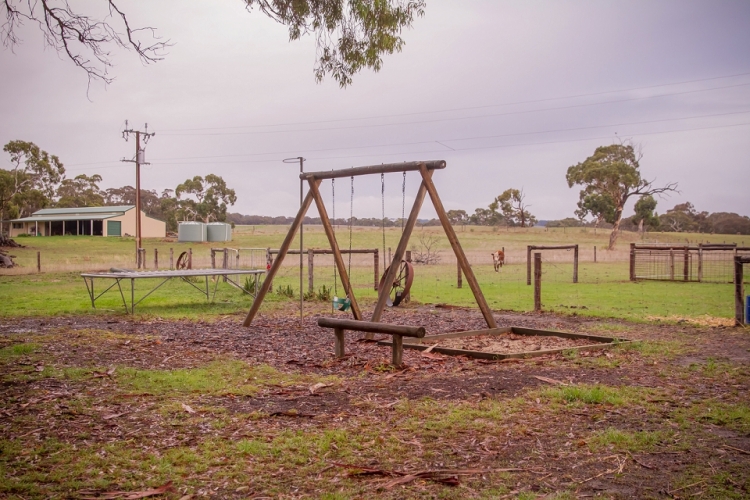 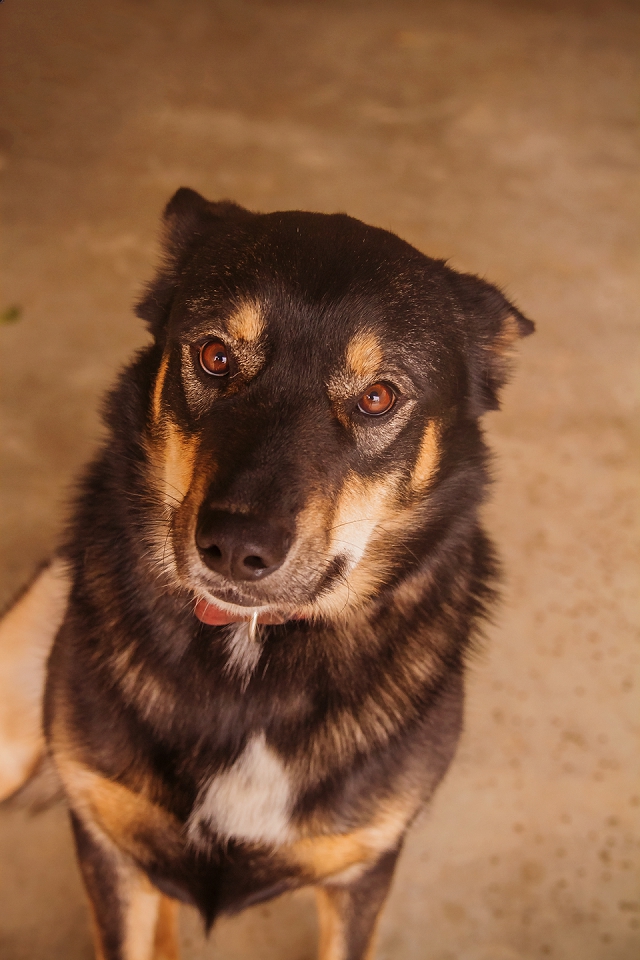 That afternoon the kids had the pleasure of meeting and feeding the farm animals which they really enjoyed and really got in there with the animals (although my younger son was a bit tentative at first). They really revelled in the experience of seeing animals such as Lucy the Goose and some baby ducklings as well. 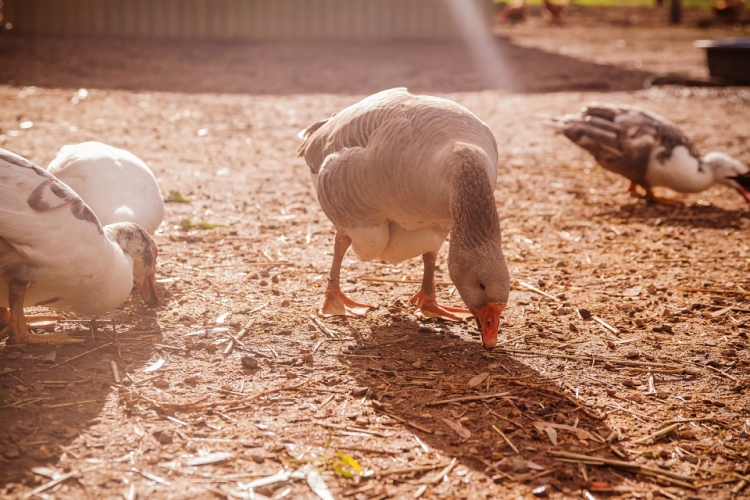 Miss 4 feeding one of the little ducklings

The kids also got to have fun on the play equipment there, master 8 especially loved the cubby house.

After a night in front of a log fire and roasting marshmallows, we headed to Granite Island to see some of the penguins there, master 8 is quite fascinated by them as he has studied them at school.

Feeding time for the penguins

I then took the boys for a ride on the horse drawn tram which they loved, I took some photos whilst we awaited for the tram to arrive.

The tram has almost arrived (with JJ the horse)

After we got back the kids got to do another round of the farm with the animals and they did this each day until we left. Here is a few more photos before we left the next day.

And on the morning that we were to leave, I captured this rainbow, seems like the perfect ending to a wonderful weekend. Thanks so much to Rob and Tracey for our wonderful weekend, we will have some very fond memories of our fab weekend! I give 5 out of 5 stars for this farmstay establishment and I am sure I will be back there again very soon!

Jasper, a cat like no other {Dealing with loss and grief}

This week I had to make the hard decision of having my 19 year old cat put to sleep, he was in a lot of pain and I couldn’t bear to see him in pain. He has had a long and beautiful life, he was my best friend and my confidant. He has been with me since I was a teenager and I am now 35 so he was everything to me. I guess no one person deals with grief in the same way and I find that writing has helped me with that loss and grief that I feel.

Jasper had been a rescue cat from another home where he had been abused, he had been infested with fleas and I took him in with open arms. Instantly I felt that bond with him and knew that I could set up a new life for him where he could be loved.

I find the hardest thing about missing Jasper is that he was a cat that would put up with anything, well from me anyway as he wasn’t that enthused with strangers or even other family members (although he did tolerate them). I could roll him onto his back and he would just go limp while I rubbed his belly with no qualms as to what I was doing to him and he would purr at a single touch from me. I remember when he used to hook gently with his claws (he always had a gentle touch) and grab at our feet (whilst hiding under the bed) as we walked past. Or he would hang out a paw as the kids walked past to grab onto their clothing (making them jump and us giggle). Even as he has gotten older he has still been able to rough and tumble with Katsuma (one of our other cats) and even the other day the kids had him playing with a piece of string (at 19 mind you!), it was almost like he knew and had to have a play with them one last time. When he played with me (when I roughed him up) he would retract his claws so that he wouldn’t hurt me too much and he loved to play with string or balled up tin foil

When I used to catch the bus regularly he would follow me a few footsteps behind and would then be there on my return to walk with me home. Even in his old age if I was to walk to the shops with the kids he would run after ask mewing as if to ask where were we going.

When expecting the kids he would know I was pregnant way before I even did and would rest on my chest, his chin laying against mine which he never did unless I was pregnant.
I have never met another cat like him and I’m sure people hear that a lot but he was special. Jasper was my sleeping buddy and would always sleep on my pillow, I will miss that so very much. My pillow now feels very bare without him there purring in my ear.

I have never met another cat like him and I’m sure people hear that a lot but he was special. I love the other cats I do but I miss that interaction I had with him. I can’t roll the other cats so I can rub their bellies nor play with them as I did him (I would lose a hand if I did!), they certainly have their very own personalities, I think that will be the one thing that I will miss the most.

We have spent this week looking at albums of when Jasper was young and remembering him as he was, a lover of water – the amount of times I had found him in the basin awaiting my presence to turn on the tap for him. I remember when he was still fairly young and he would stand with his two front paws in a tub of water and would purr like no tomorrow.

May Jasper find his favourite spot for a dirt bath in cat heaven just like you had here. We will bury your ashes in your favourite dirt spot in the garden as I knew you would have wanted.

Love you buddy, may you rest in peace xx

Have you lost a much loved pet? How did you deal with the grief? Please feel free to share a story in the comments below about your beautiful loved one.

Excitedly I ripped open the packaging to find my glorious copy of The Labyrinth inside (can you tell I’m a big Labyrinth fan?). Jim Henson’s Labyrinth is written by A.C.H. Smith and illustrations by Brian Froud.

I wasn’t sure what to expect when I opened the first page of Labyrinth – The Novelization. Whilst most books are written first and foremost and the movies are made afterwards, it was the opposite in this instance. Most movies don’t live up to the book it was made from but would this book live up to the movie?

I have to say I was happily surprised when I started reading, not often do I read a book and hear the voices of the characters come forth, I could picture each landscape as the were in the film and the book did not venture at all from the story, keeping to the narrative as it was told. The description of each scene was smoothly told, really drawing you into the landscape that is The Labyrinth.

Once I had completed the book, towards the end were copies of Jim Henson’s handwritten words that were a part of his journal that he had wrote whilst coming up with the themes for Labyrinth. It will certainly be something that I can relate to while coming up with the background for The Cat and her Mistress.

All together I would have to say that this book receives 5/5 stars from me and well worth purchasing for your home library. I hope that my kids will one day treasure this classic like I did as a child!

Welcome to the year 2015 but where is my hoverboard?

All jokes aside (I can dream about a hoverboard though, right?) I thought I’d start the new year by saying hello and welcome to 2015! I hope everyone is surviving the heat we have had today here in Adelaide (44 degrees!).

I haven’t managed to get much writing done in the past few weeks, it’s hard to fit it within the kids activities and school holiday’s but that’s not to say that it hasn’t always been on my mind. Lots of plot twists and turns constantly flurry around in my head (I think it must get pretty busy in there). My characters are always with me as well, I’m always thinking about them and the type of journey I want them to travel. Not just a journey that takes them from place to place but their own personal and emotional journey as well. How will they grow to be the characters they are today?

Writing stories has always been a part of me but so has reading and I have been enjoying quite a few books of late. My current favourite  is by Richelle Mead who wrote the Vampire Academy series. I’m now onto the Bloodlines series and really enjoying it, so much so that sometimes I don’t get to bed until about 2am…oops! I just can’t help it when I get into a really good book. I’m sure there are plenty of book readers out there that would understand this…and like me regret it the next morning as well!

Are there any Labyrinth  fans out there? The movie Labyrinth was always a childhood favourite for me and who can resist David Bowie in tights (I think that came as I grow into adulthood though hehe). It has always been a classic for me (along with The Neverending Story)  but how excited was I when I found out the other day that there was Jim Henson’s Labyrinth: The Novelization back in print.

Of course I had to purchase it straight away and I am now eagerly awaiting my copy, I will let you know my thoughts once it has arrived and I have had a chance to read it.

I don’t see  see much of The cat and her Mistress being written until the start of February (once school goes back and I can concentrate better) but I can’t say I will be stopping my late night reading for the time being, hey I need to keep the creative juices flowing right?

Oh and  if you are on Goodreads then head on over and you can find my author page at this link HERE or if on facebook then I have a page HERE. These pages are a great way to keep in touch with me (and vice versus) and to keep updated on the progress of The car and her Mistress.

I look forward to following this journey into 2015 with you and please don’t forget to say hi as I love to know who is reading!